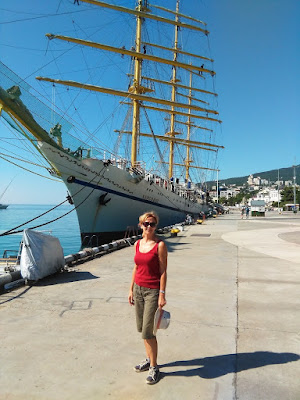 In Around the World in Eighty Days, my hero Michael Palin famously described the city of Alexandria as being “like Cannes with acne". Maybe Yalta used to be like Bournemouth with boils, but it was very different when Irena and I went there for the day.

I had not been back to Yalta since before Irena and I were married. In a few ways, it was much the same (the mountains frowning down on the sea, the cypress trees, the vineyards and the church that does impressions of a wedding cake). But really Yalta is now quite a different place. Yes, the beach is still a painful and pebbly Via Dolorosa if you want a swim in the murky seawater. (And, just in case you were wondering, the water in the Black Sea is not actually black.)

On the busy streets, you can still buy kvas, even though I am not sure how to spell it. (But why would anyone want a stinky drink made from fermented bread?) Twenty-five years ago, kvas was served in jam jars, but now they give it to you in a glass. And yes, there are still plenty of stunningly gorgeous Russian girls, with long blonde hair and even longer legs.

What has changed is the atmosphere: pride, progress and prosperity. The dinginess and dilapidation that pervaded Yalta twenty-five years ago, when it was the time of perestroika the Crimea was part of the Ukraine, are all gone. The flimsy food stalls and tatty kiosks are gone. This was on Putin's orders, according to Irena, as was the removal of all the metal fences around the beaches, so that now you do not have to pay to use the beach.

Why are there still statues to Lenin in Russia? Statues to Hitler are not allowed in Germany. I cannot imagine that there are any statues to Pol Pot in Cambodia, but of course in China you will see Chairman Mao's face on every banknote.

Cool, snazzy restaurants are springing up everywhere in Yalta. After our dip in the Cherne More, we had a late lunch in quite a nice place where they served a Tartar dish called lagman, a sort of thick and spicy soup made with lamb. It was delicious and the beer beforehand was good too.

Although we saw plenty of vineyards on our way in and out of Yalta, I would say that on the whole, the Crimea is not a country for wine lovers. It used to be, a quarter of a century ago, but now the quality has gone down and the prices have gone up. That is one thing that Mr. Putin has not managed to fix. Well, not yet.
Some western commentators have claimed that the Tartars, a Muslim minority in the Crimea, have had a tough time of it since the Russian “takeover” of the Crimea. Well, all I can say to that is that all of the evidence I saw pointed in quite the opposite direction. There is a new Tartar Museum in Simferopol and just outside the city there are new Tartar villages, with some large and prosperous-looking houses. Incidentally, we had a Tartar as our driver for the minibus on our journey back to Simferopol from Yalta. The guy was a nutcase, overtaking on blind bends and uphill. It was quite frightening. Perhaps he was in a hurry to get home because his wife had told him that they were going to have lagman for supper. 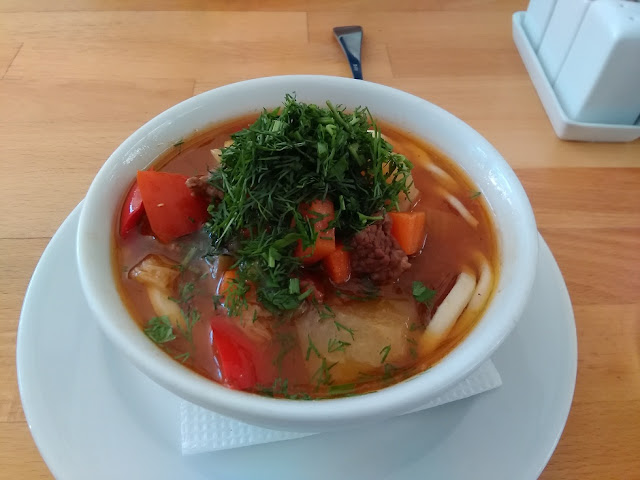