April 16, 2021
Somehow we survived the shock of the chimney fire and we also lived to tell the tale after our AstraZeneca jabs. Regular readers of Claire's excellent blog, Auntie Bulgaria , will know that she often has a section entitled "Gardening Bore". Well, just to be completely different and original, I have decided to include a section about what we have recently been doing in the garden and, as I cannot think of a better title for this series of posts, I am going to call it "Gardening Bore". So now you know. Is the video going to work? Well, this is the first time I have ever included a video in one of my blogs and so my guess is that no, it probably will not work. The video is supposed to show me cutting the grass with my new Husqvarna tractor mower. (Bosch never gave me a sponsorship deal, even after all of the free publicity I gave them in this blog, so maybe Husqvarna will come up trumps.) On the garden wall you can see all of the old cart wheels that I repainted. (
Post a comment
Read more 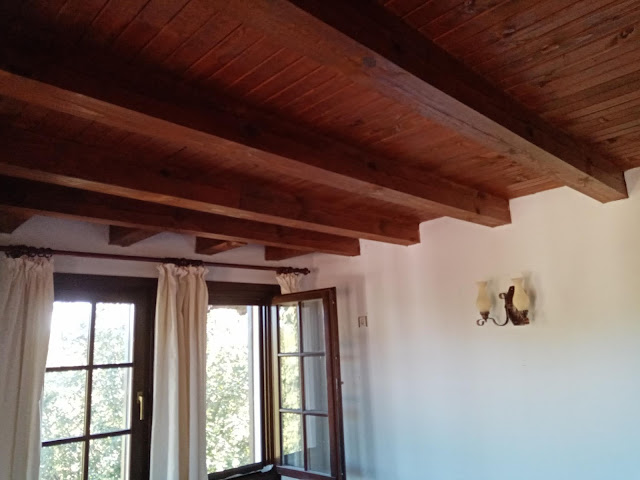 Beam me up, Scottie! We had an interesting experience the other day. It was a snowy and chilly morning, so I put an extra log or two onto the fire. Then Irena said that she could smell some burning plastic. Well, I could not smell anything. About half an hour later, we found that a lot of the tiles in the bathroom had cracked. Well, the chimney from the main fireplace goes up through the bathroom. And the chimney was on fire! Then we started to notice the smoke that was coming from the ceiling. Yes, we have a wooden ceiling for all of the top floor, with big wooden beams. I managed to get up into the loft (the first time I had ever been up there) and yes, we had a serious fire. Some idiot had left a hole in the cement floor behind the chimney and now there was a serious fire inside the wooden ceiling. Well, to cut a long story short, I made a hole through the cement floor of the loft and poured in lots of water. Fortunately, this did not cause a huge electrical problem, even though the
Post a comment
Read more 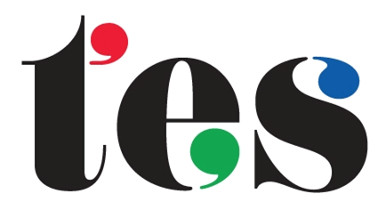 Several people have tried to contact me through this blog, as they miss my input on the TES forums. Well, the truth is that the TES teacher forums have disappeared and there is a technical problem that means that I cannot write replies on my blog at the moment. For years, I have been scribbling bits and pieces on the TES forums, as I would like to help other teachers, if I possibly can. Then the TES management (or mismanagement) decided to get rid of all of the forums, closing them down and scrapping them completely. To say I was upset by this would be a bit of an understatement. The good news is that there is now a replacement, staffroom.boards.net, and many of the old crowd from the TEs forums have gradually migrated to these new forums (or is it fora?) Including, of course, a smelly old hippopotamus.
Post a comment
Read more 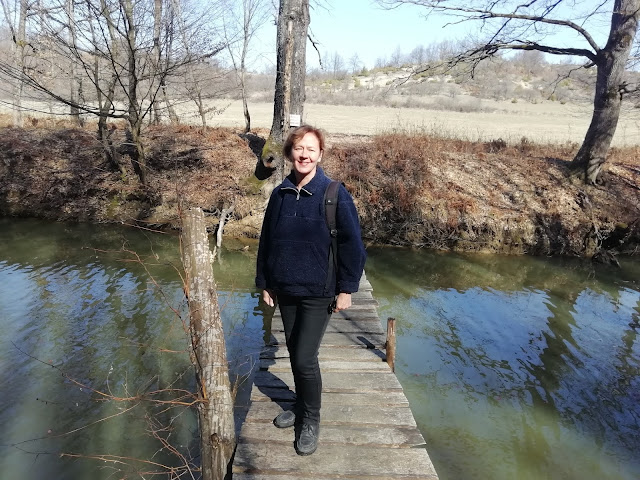 Dear John, It is always good to receive an e-mail from you, old friend, and it is even better to get one in these sad pandemic days. We are here in our country house in the Bulgarian countryside and in some ways that is lovely, but really we are more or less stranded here as prisoners. Like everyone else, we are wondering when life is going to return to something like "normal". Well, I have put rather a lot of woodash on my new veggie beds. Maybe I will not be putting on any more! I know that tomatoes like alkaline soils, but perhaps one can overdo things. I was very sad to read about your sister. Do you normally go out to see her a couple of times each year?  I cannot believe two thousand quid for a British Airways ticket. That is outrageous. Perhaps you should do a Michael Palin in reverse. Get a cheapie flight to New York and then take the train across America. I would love to do that. I mean, if it is going to be a twenty-hour journey anyway, then you might as well take a
2 comments
Read more 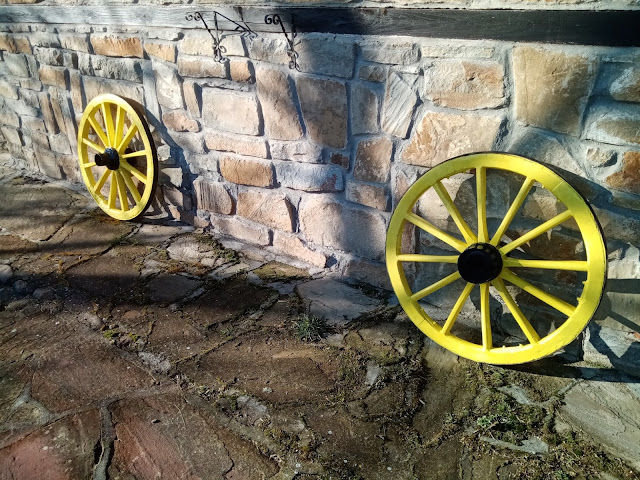 When we first bought the house, we did not really notice them. Then we saw them and said that we really must do something about them, sooner or later. I am writing about the splendid, old-fashioned cartwheels that we found hanging on the garden wall and by wall of the house, next to the front door. The bad news is that no one has looked after them. If you paint cartwheels every other year or so, then there is no problem, but they will start to rot if you leave them too long. The other piece of bad news is that it takes ages to paint them! It is a slow job and you just cannot rush it. The red ones needed three or four coats of paint, but now they do look rather good, I must say.
1 comment
Read more 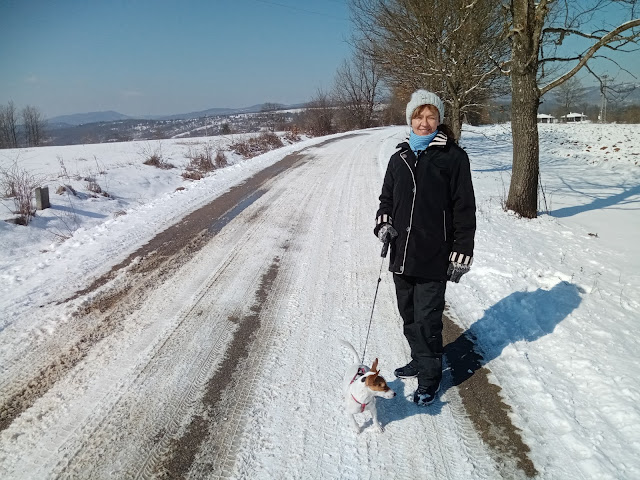 Well, Trump's second impeachment seems to be over, but the pandemic shows no signs of ending sometime soon. Maybe the Bulgarian government has plans to distribute the vaccine to everyone, but when will this actually start to happen? In the meantime, we are lucky to be able to stay in our country house and keep safe. In these days of the Coronavirus, the most exciting thing that we do is to take the dog for a walk.  The good news is that Tina is a naughty little doggie and she always enjoys herself. It makes Irena and me happy to see our little dog having a good time. The countryside around Daveri, although bleak and bare in winter, still has a wonderful, wild beauty that makes me think of that rather weird and emotional Gerald Manley Hopkins poem: What would the world be, once bereft Of wet and of wildness? Let them be left, O let them be left, wildness and wet; Long live the weeds and the wilderness yet.
1 comment
Read more

The Roma, BG and the BBC 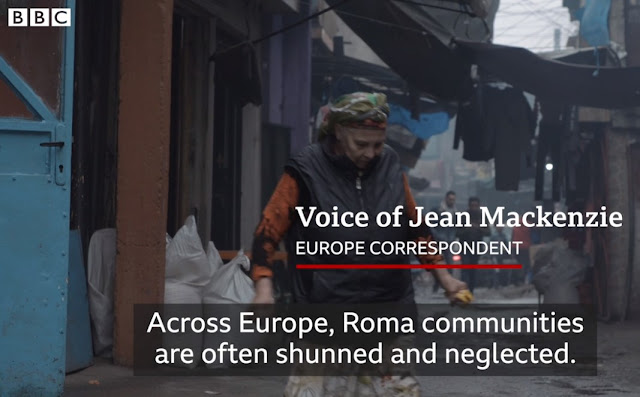 Thanks for contacting the BBC. This is to confirm we’ve received the attached complaint sent in this name. We’ve included the text of the complaint and a case reference for your records (see below).  Our normal aim is to reply at this stage within 10 working days (two weeks), but we hope you will understand that sometimes we are unable to respond by then. We will let you know beforehand if we think it may take us longer. We’ll normally include your complaint in our overnight report to producers and management. This will circulate your and all complaints with other reaction we receive today (but with any personal details removed) so it will then be available for the right team to read tomorrow morning. For full details of our complaints process please visit:  https://www.bbc.co.uk/contact/how-we-handle-your-complaint .  Please don’t reply to this email because it’s an automated acknowledgement sent from an account which can’t receive replies. If you do need to get in touch, please use o
Post a comment
Read more
More posts