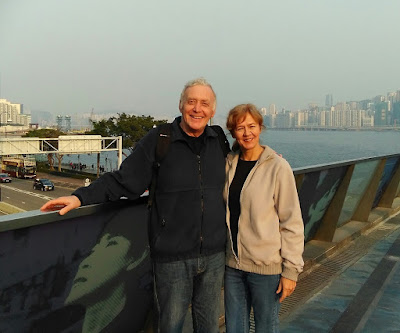 When we go to Sofia, we sometimes have lunch at The Happy Grill (very unoriginal), but in HK it is usually a trip to the Prince Edward metro station (use your Hong Kong tong) and to the One Dim Sum restaurant half way down Playing Field Road, on the left. Actually, it is not one dim sum – it’s lots of them. 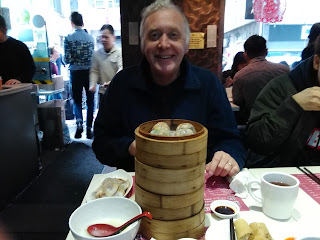 And just in case you did not know, dim sum have nothing to do with being bad at Mathematics. They are a bit like jaozi, as they are pastry rolls filled with all sorts of yummy things. Hongkies, if you still have not worked it out, are residents of HK. Shenzhen is just around the corner and over the border, so we were only temporary hongkies.

When you get to the restaurant, there is always a queue and sometimes you have to wait nearly an hour for a table. In fact, we arrived at about three in the afternoon, a very non-lunch hour of the day, and yes, there was still a queue and it was crowded inside.
Those round bamboo baskets soon arrived at our table and they were placed one on top of another, a gastronomic Tower of Babel. Yes, we ate too much, but it was just so good that we could not resist the temptation. The young man with his elderly mother at the next table also seemed to be enjoying their meal, judging by the loud burps and noisy slurps that the old girl made. 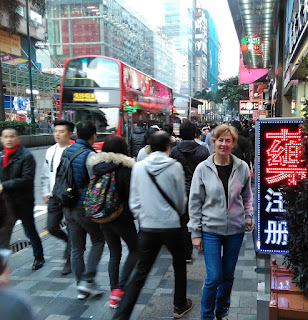 The bill was reasonable and we attempted to lose some of the extra calories with an overweight walk along the seafront. There were lots of red lanterns outside The Peninsula, but no sign of Michael Palin. A new hotel seems to have appeared and unfortunately it now blocks off most of the promenade, so you have to walk a bit further if you want to look across from Kowloon to Hong Kong island. There was a bit of seafront left and so we were able to have a stroll next to the sea and gawp at Hong Kong’s amazing skyline, that symphony of modern architecture. The lovely show of chrysanthemums reminded me of John Betjeman’s book of poetry, A Few Late Chrysanthemums, but it was February so really the flowers were early rather than late. 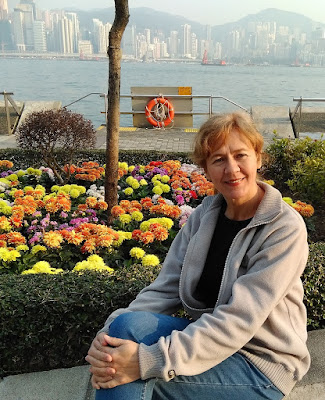 There is also a garden to replace the seafront, complete with all of the hand prints and the statues of the famous film stars that used to be along the promenade. 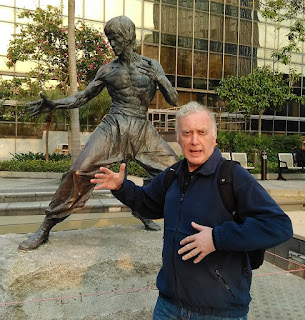 Irena took a photo of me doing a Bruce Lee pose. (Bruce Lee appeared in women’s clothes in one of his films, Enter with Drag On.) Mrs H and I had a well-fed wander about and, like everyone else, we took some more photos of ourselves standing next to the bronzes of the film crew. The last photos were of me sitting next to a calorifically-challenged pig. Well, they say that you can tell a lot about a man’s character by the company he keeps. 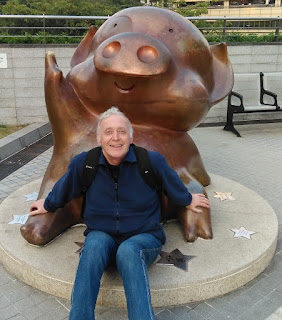 I must apologize to the regular readers of my blog, as I have not posted anything for more than two weeks. Irena and I have been in the Philippines, where the Internet connection was poor. After a trying several times, I just gave up trying to post anything new. I did, however, write no less than five new posts, so here they all are. 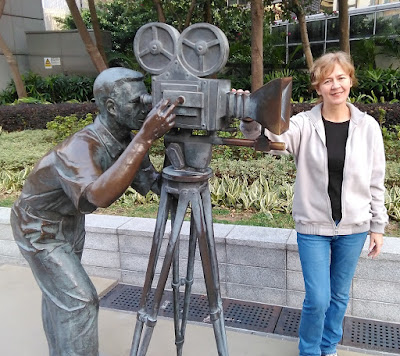