It was of course J.R.R. Tolkien, in The Hobbit, who wrote, “It is a dangerous business going out of your front door.” The truth is that more and more Chinese people are not just going out of their front doors: they are heading overseas for their holidays each year. Should we be celebrating the adventures of these Middle Kingdom (not Middle Earth) Bilbos?

In the Philippines, the waves of Chinese tourists that invade the archipelago, especially during the Chinese New Year holiday, bring lots of tourist dollars. The problems that Mr and Mrs Chen and their children bring with them are not so welcome. (Those who have read An Unexpected Party may recall that Mr Baggins was rather put out by the large number of uninvited dwarves that appeared at Bag End.) For example, the Chinese young men in the next hotel room to ours were talking and laughing loudly on their balcony until after 1am. 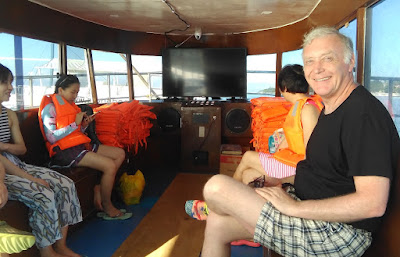 Although Chinese children are so well-behaved in China, especially at Green Oasis School, on holiday they run amok. For example, at Hong Kong airport one Chinese child was making a dreadful noise in the queue for the security check, but the parents seemed to be unwilling (or unable) to do anything to quieten him. Indeed, the poor behaviour of the loud, rude and badly-behaved mainlanders is proverbial in Hong Kong. Burping loudly in restaurants, pushing to the front of queues, peeing into garbage bins, eating noodles on metro trains: lots of hongkies have horror stories about the Chen family from over the border. (Even in mainland China, there was a lot of fuss recently about the Chinese boy who peed over the buttons in an elevator, causing the electricity to short circuit and for the lift to stop working.) At the Bohol Bee Farm it was a similar story and the Filipino staff would quietly sigh when yet another coach-load of Chinese tourists arrived.

The majority of Chinese travellers are moving in large herds, as part of big tour groups. I am sure that gradually the number of free and individual travellers will grow, as the younger Chinese improve their English language skills. Then maybe Chinese tourists will learn the delights of Trip Advisor and Lonely Planet. (Perhaps one day pretty Chinese girls will even discover cotton, instead of the ghastly synthetics that every Chinese female feels compelled to wear.) Maybe they will start eating in the restaurants, instead of boiling noodles in the kettle in their hotel room.

A German research institute has calculated that more than 150 million Chinese travellers ventured overseas last year, although admittedly about 60 million did not get any further than Hong Kong and Taiwan. 4.3 billion holidays are taken every year by Chinese people, but about 3 billion of these are taken within China itself during the Chinese New Year. As the Middle Kingdom’s aspiring middle class grows, it seems likely that they will soon be converting those domestic holidays into international ones. But as Bilbo and the dwarves discovered, it can be a serious matter when a dragon wakes up.

Back in the 1960s, we British told silly stories and rather racist jokes about Japanese tourists in London and there was a beer advertisement that poked fun at the gullibility of American tourists (“Are you Lord Tankard?”) No one makes these jokes anymore because Americans and Japanese tourists nowadays have become more or less invisible. The large tour groups have broken down into couples or small family groups and their increasing intercultural familiarity has enabled them to move more easily and more widely through the countries they choose to visit. This must surely happen with Chinese travellers, even as their absolute numbers grow.

Of course, we British should not feel too superior. Again, it was Tolkien who reminded us: “The Hobbits are just rustic English people, made small in size because it reflects the generally small reach of their imagination.” But if more Chinese people are travelling overseas than ever before, then surely this has to be a good thing, in the long run, for both China and its neighbours?

We met one young lady, Echo from Shanghai, who seemed to typify a new kind of Chinese traveller: independent, articulate, well-informed, with excellent English and a desire to understand the cultures and the countries that she was encountering on her travels.

But understanding and cultural sensitivity should be reciprocal. At the Bohol Bee Farm, it was disappointing to see that not one of the Filipino staff could speak any Mandarin. I have the impression that in the Philippines, no special effort is being made to prepare for the tourist tsunami that is heading their way from across the South China Sea. Let us hope that this will start to change soon and that, again in the words of Tolkien, “Not all those who wander are lost.” 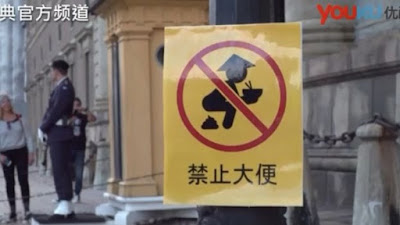 Since I first wrote the above post, there has been a lot of bad feeling between Sweden and China. Yes, there were some rather loud and badly-behaved Chinese tourists (surprise, surprise) at a Swedish hotel, but the incident was exaggerated and exacerbated by a satirical comedy programme on Swedish TV. Oh dear! Six of one and half a dozen of the other? So are Chinese tourists going to learn how to travel less obtrusively? And when will the rest of the world try to be a little bit more patient, given the fact that international travel is still a novelty for most Chinese people?
Bohol Bee Farm China racism the Philippines tourism