A Whale of a Trip

We decided that we wanted to go on the Whale Shark Tour. We have done several other tours in the Philippines and really this was the only one we had not done. The hotel told us that we had to get up at 5.30am, which we were not too keen about, and they said that the trip would cost us 1,200 pesos each. They also told us that we would probably back at the Bee Farm by 2 or maybe 3pm. Well, we duly got up at the right time and took a tuktuk, one of those three-wheelers that does a passable impression of a WW2 Bren Gun carrier. 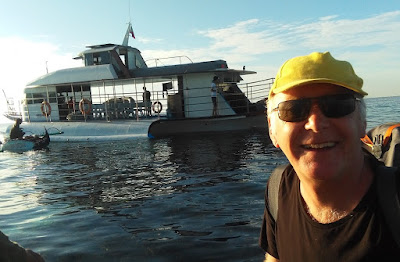 We soon arrived at Alona Beach, on another part of Panglau island, where the Whale Shark trip was supposed to start. A couple of Filipinos paddled us out to the ship in what looked like a plastic box. More than two hours later, we were still at Alona Beach, waiting for the trip to start! 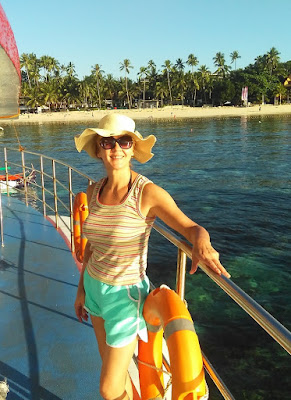 We finally left and had quite a pleasant sail past Virgin Island (Richard Branson seems to be everywhere these days) and across to Oslob, on the island of Cebu. (Is Oslob full of messy Norwegians?) There we had to pay 1,000 pesos each and then we went along the beach a bit to a French restaurant, where we waited for our turn to go and see the whale sharks. Three hours later, we finally, finally were told that it was our turn, so we got into another little boat and were paddled out to the whale sharks. Yes, it was a bit sad and a bit pathetic to see all these little boats clustered around the whale sharks, like WaterWorld meets the Henley Regatta. But when we got into the water and the whale sharks started to swim past us, that part was totally amazing.

Whale sharks do not look very smart. Their wide-apart eyes and their big mouths make them look like Boris Johnson, but at least they do not have a stupid haircut. Whale sharks are big and I mean huge. When you are snorkelling, you get used to seeing teeny little fish, no bigger than a sardine. Then a whale shark comes along. It’s the piscatorial equivalent of a London bus, an underwater 747. Well, I think that maybe five or six times a whale shark swam right past our boat, about a metre away. I was wearing my mask and snorkel, so I got a good view each time. Although they probably have low fishy IQs and will not be appearing on an aquatic University Challenge, whale sharks are amazingly graceful and dignified creatures, even when they are surrounded by upwards of three hundred humans wearing awful orange life jackets.

Well, that bit was really great, but from then on, our Whale Shark Trip just went from bad to worse to flipping dreadful. As we were so late seeing the sharks, our boat back from Oslob on Cebu island to Alona Beach did not leave when it should have done. A serious storm was brewing and at first the Coastguard would not let us leave. Then finally we did get permission. 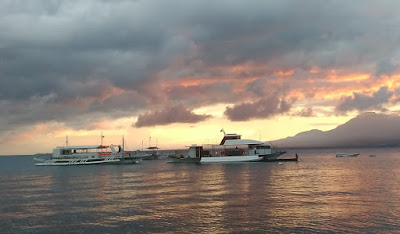 After two hours of getting almost nowhere, we had to turn back, but by now the sea was so rough that we could not land again at Oslob, so we had to continue round the side of Cebu island, in order to find somewhere more sheltered. This took another two hours. We were finally able to get off the boat, but by now we were even further away and there was no way that we could get back to Alona Beach and the Bee Farm on Panglau. Oh, and I just had a wet pair of shorts and a tee-shirt. We did not have enough money to hire a room for the night and the “guide” wanted an extra 2,400 pesos from us.

Eventually the “guide” decided to lend us some money so that we could find somewhere to sleep. This was also a disaster. You may recall that the Roman poet Vergil was Dante’s guide to Hell, but this woman did not do such a good job and checked us into a room for the night for 1,500 pesos. Although the room itself was not bad, she somehow forgot that people often like to sleep at night. That is a bit difficult if your room is close to no less than two super-loud, disco-thumping all-night music venues.


When the “music” finally finished at about 2am, the dawn chorus began. Yes, everyone who has read The Canterbury Tales can remember Chanticleer and Pertelote, so it was no big surprise that there were a few cockerels crowing to welcome the rosy-fingered dawn. But then there were some more. And then a lot more. Cock-fighting is very popular in the Philippines (you can even watch it on TV) and that means you need a lot of cocks, not just one. What usually happens is that the referee puts a hen between them, to start the fight, and razor blades and other sharp things are tied onto the spurs of their claws. Then the cocks rip the hell out of each other, until one is the winner and gets carried round in triumph. The other is KFC. ¡Muy gusto! In the garden next to our room for the night, we saw some of these feathered male bruisers chained to posts, to stop them from scrapping whenever they feel like it. Well, they were tied up, but that certainly did not stop them from crowing.

The next morning, after hardly any sleep, we got back onto the boat at 7.30am and we finally made it back to Alona Beach about twelve. It certainly had been a whale of a trip. Apart from seeing the actual whale sharks, the rest of it was pretty awful and spoiled two days of our holiday. In the end, it cost us more than double what we had been told, nearly 6,000 pesos. (It was about 75 pesos to the pound.) Sometimes it seems that the real sharks are on the land, not in the water.


The good news was that after we told our tale of woe to one of the management at the Bee Farm, she kindly upgraded us to a super-posh room with an ocean view. (Normally such a nice room would cost a lot more than what we had paid for our original room.)
Bohol Bee Farm the Philippines whale sharks