December 01, 2017
China is well known for offering a vast variety of different foods. The very concept of “Chinese cuisine” is hard define because the country is so big and the dishes vary so much from place to place. One passion that does unite the country, however, is a love for street food. From Shanghai to Xi’an, you will find the locals getting their meals on the go at tiny carts and hole-in-the-wall counters. Despite your worst fears, Chinese street food is not sponsored by the makers of Kleenex and Immodium and to overlook street food is to miss an important (and delicious) component of Chinese culture. With a few easy precautions, you can enjoy a wide variety of really tasty dishes, with only a small risk to your health and no danger at all to your wallet.

Before you can enjoy the best Chinese street food, you have to find it! In most big cities, food vendors seem to group in clusters. To find the most popular places, you should look down the side streets, not busy main roads. You will have better luck in the older parts of town than in the newer business districts. Not far from Green Oasis School, there is Tian Mian, a labyrinth of narrow streets and tall tenements where many cheapie restaurants, vendors and food outlets can be found. Finally, anywhere close to Shenzhen University is a good bet for finding cheap food. If you are at a total loss, ask a local to point you in the right direction. Timing is important because many stands only appear in the early morning and after dark.

Once you see something that looks enticing, take a moment to analyze the situation. In the war against food poisoning, your first line of defence is your eyeballs. Does the stand look clean and efficient? Are the ingredients covered and protected from flies? Or is there meat sitting in the sun? Your best bet is to go for food that is made fresh to order as your wait. You do not want anything that has been sitting there for too long.

When you are picking where to eat, follow the locals. Try a stall with a long line or where there are a lot of people eating outside. While it may seem a bit crazy to want to wait in line, a vendor that is popular with the locals is likely to sell the tastiest and the most sanitary food.Lots of people also means a higher ingredient turnover, which mean things are likely to be much fresher. Beware of a stall that people seem to be avoiding because that is where you will run into tummy trouble before you can say “gastroenteritis”.


The chances of a street food vendor speaking any English are less than zero, so it is time to employ some creative methods to get your message across. Try pointing, nodding, grunting and maybe even miming. You can use your fingers to indicate the number you would like, although keep in mind that the Chinese count on their fingers differently than we do in the West. Do not worry, as the vendor is likely to be more amused than annoyed at the spectacle you create. Watching a laowai (foreigner) buying and eating Chinese street food is something that the locals may find hilarious.

One of the greatest things about street food is that it is impossibly cheap, as you can often get a full meal for less than a euro. The downside to this is that vendors are not likely to have much change. If you are planning on some serious snacking, then make sure you have some small change. A ten RMB note is a good start, although some one RMB notes or coins would be better.
There is a near endless variety of foods to pick from, varying wildly from region to region. You can of course try anything that looks interesting or smells good. If you are not sure where to start, here are some popular snacks to keep an eye out for.

Firstly, try some baozi. These are soft steamy buns with a variety of fillings. Pork is the most popular. Usually you buy a wooden basket full of them and dip them into a spicy soy sauce mixture or, even better, that yummy peanut sauce. They are most popular for breakfast. Also look for their popular dumpling cousin, jaozi. They are a bit like Russian pelmeni. Irena and I often have jaozi for supper in the evening. You can fry them to make the pastry brown and crispy. They are excellent with a cold Tsingtao beer.

Kao rou is a type of Muslim barbecue brought to China from Central Asia. This is particularly popular in the Shaanxi province, but it can be found all over the country. Strips of lamb are rubbed with spices, skewered onto a stick and then grilled over a low flame. Chicken and sometimes beef are also offered. Your order is based on the number of sticks you would like.

One of my favourites is “tea eggs”. You will see a big pot of eggs boiling in a black liquid. The black tea stains the eggs brown and gives them a uniquely nutty flavor.

Then there are The Things on Sticks. This could be nearly anything from candied fruits, to fried potatoes to hot dogs. You name it and the Chinese will put it onto a stick. In the Dongmen shopping district of Shenzhen, well known for fake Rolexes and knock-off Gucci bags, you can try all sorts of exotic things: rolled up snakes and weird things on sticks, including scorpions and centipedes. The oysters with vermicelli are good and of course, there are also many, many variations of dumplings, noodles, breads, soups and more. Just look around and see what catches your fancy. 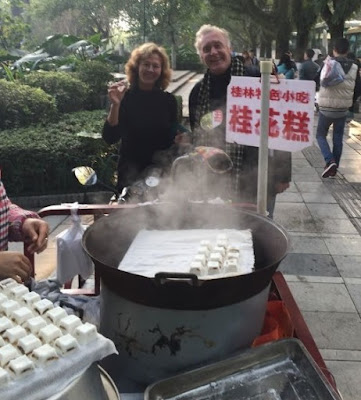 There is always an element of daring in every new street food experience. Without speaking Chinese, there is a big chance that you will not know exactly what you are getting. (In fact, that might be an advantage.) You also might not know the correct way to eat it. There is always a danger, however small, of getting sick. On the other hand, the rewards of an interesting, cheap, and delicious meal outweigh that risk for many people. So take a chance and sample something new. At the very least, it makes a great photo and a good story.
China Shenzhen street food