December 20, 2017
Yesterday’s walk in Lizhi Park here in Shenzhen was enjoyable. The sky was absolutely blue, without a single cloud, and in the Sun (and out of the cold wind) it was as warm as toast. At night, our apartment is so cold, as the windows are not double-glazed and you can feel the cold air coming in. But shivering at night here in Shenzhen made me think of the winters in Bulgaria. We have only experienced part of one BG winter, so how are we going to cope with the real thing next year?

It all starts with Autumn (or Fall, if you are an American). This is a wonderful time in the Bulgarian countryside, with walnuts and mushrooms to be found. Here are just a few of the walnuts we collected from the trees at the end of our garden. Our villa is next to an abandoned orchard, so we are going to follow Auntie Bulgaria’s example and have a go at making lots of cider.

Even by the middle of October it can be chilly in Kalotina, as we discovered back in 2015. When we first arrived in Shenzhen, the HR people at Green Oasis told us that there was a problem with our visas, so we had to go back to Bulgaria. It was nine anxious weeks later that our paperwork was finally sorted out and our blue Chinese Z visas were stuck into our passports. By then, the weather in Kalotina was decidedly cold and it was only the middle of October! 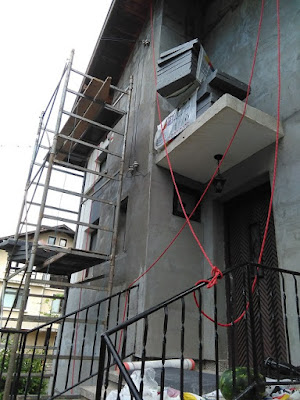 That same summer we had some serious insulation work done to the exterior of the house. Big grey polystyrene blocks were stuck on, then a mesh stuck onto that and then the whole thing was plastered over with honey-coloured plaster. We also had an extra front door put on the front of the house, partly for added insulation but also for security.

The wood-burner we currently have in the kitchen will probably have to go. Instead, we want to buy one with a big water tank at the back, so that pipes and a pump can be connected. Then boiling hot water will go to radiators all over the house and a heat exchanger will heat up the hot water tank in the bathroom. Well, it all sounds good in theory, but how much is it going to cost and how long will all of the work take to complete? Of course, there will be lots of drilling, in order to install the pipes.


A wood-fired central heating system is going to require a heck of a lot of wood. There is, fortunately, no shortage of the raw material in the Bulgarian countryside. Getting enough of the right kind of wood, cutting it up into suitably-sized pieces, storing it properly so that it dries out: these things might be a bit difficult and time-consuming.

So here is a photo of the front of the house, with the new front door. After the workmen added the insulation blocks, they put on a new layer of yellow plaster.

I also wrote to Claire, as her blog at  www.auntiebulgaria.blogspot.com is so excellent. And, as usual, Claire generously and kindly replied!


What about keeping warm in the winter? We are planning to get a boiler that will burn either pellets or logs, so we can switch from one to the other. Do you have a pump that pushes hot water all round your house? What about the bathroom? Do you have a heat exchanger, so that the central heating system will also give you loads of hot water? Was it all very expensive and did they make an awful mess when the system was installed? And how much did it all cost?

We are still in Shenzhen, where summer has already arrived and the parks are full of flowers. Only 82 days to go to the glorious end of my teaching career. Anyway, you can read all about it (time for the shameless plug!) at www.bulgariawithnoodles.blogspot.com
ReplyDelete